Forget pantomime dames and that dodgy new romantics period during the 80s, men wearing make-up is officially cool. Encouraged by the make-up wearing trends of cool male icons such as Russell Brand, Pete Doherty and Robbie Williams, it seems the male population is gradually warming to the idea of a bit of war paint.

So much so, that pharmacy chain Superdrug now stocks the first UK make-up range for men. The male grooming range called Taxi London is a collection of male make-up essentials including Guy-Liner (£6.50), Manscara (£6.50) and Concealer (£6.50).

Over the past five years the pharmacy chain has seen the male grooming market explode and so it already has a complete collection of products on its shelves dedicated to grooming the British man. From eye creams and exfoliators to anti-ageing face serums and hair products – the range of male grooming products has doubled in the past three years.

It seems metro-sexual male grooming is nothing new as many men across the country already cleanse tone and moisturise on a daily basis. But is the British male ready for Guy-liner we wonder?

Well, according to market research firm Mintel, the answer is yes. The UK male grooming market was worth around £700m annually in 2008 and it is predicted this will rise to more then £820m this year.

The popularity of musicians, comedians and actors applying a bit of make-up has added to the growing acceptance by men. It is no longer considered strange for a teenage boy or young man to don some eyeliner and perhaps a dab of mascara, but will older men feel the same way?

The popularity of musicians, comedians and actors applying a bit of make-up has added to the growing acceptance by men. It is no longer considered strange for a teenage boy or young man to don some eyeliner and perhaps a dab of mascara, but will older men feel the same way?

Jeff Wemyss, trading director of Superdrug, says: “Men are more obsessed with their appearance than ever before. There is no longer any pain in being seen to be vain. We believe there is a real market for cosmetic products. The majority of our customers are women and we believe that these products will be bought by women for their partners, as well as by men for themselves.”

According to the pharmacy chain, metro-sexual celebrities such as Russell Brand, Jimmy Carr, Alex Zane and Robbie Williams have all admitted to using guy-liner. This in turn, has encouraged more men to experiment with their girlfriend’s make-up. However, Superdrug says the guy-liner by Taxi London is a soft, smooth kohl pencil that has been designed to be extremely easy for men with chunkier fingers to use.

Peter Kelly, of Taxi, the creator of the range, says: “We’ve developed essentials that a guy would perhaps normally borrow from his other half. It’s about subtle make-up rather than wanting to create the drag queen look.”

Students and indie kids will probably love this, but it seems harder to imagine the postman wearing blusher or your local bobby on the beat sporting some eyeliner. Will blokes now be off to the toilets to touch up their lippy during their lunch breaks we wonder? 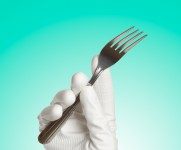 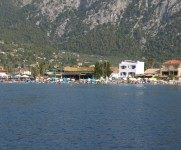