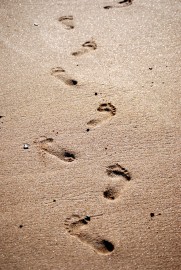 Many of us dream about seeing our footprints in white sand on an unspoilt tropical beach, but few of us like to think about the big carbon footprint we’re stamping on the earth by annually jetting off on holiday to hot and sunny climes.

It seems that while we’re booking our all-inclusive breaks in Barbados or half-board holidays in Hawaii, the last thing we’re thinking about is the environmental impact of our excursion. But many campaigners reckon it’s about time the people of Britain seriously thought about offsetting their travels.

Research from travel industry marketing specialist BLM Media shows that nearly a third of all British holidaymakers still aren’t prepared to spend a little more on their hols in order to be able to offset their carbon emissions. In BLM Media’s survey, six out of 10 holidaymakers said they had no plans to cut down on the number of holidays they took abroad to save the environment. One in three people isn’t even prepared to pay an extra £20 per holiday to offset the flight’s carbon emissions.

It also seems that campaigns by travel companies that promote “green offers” aren’t working with customers. Almost half of the people questioned admitted that they would not book a holiday with a company just because it had green credentials. Only 24 per cent of people said they would select a company based on its environmental credentials – and the majority of these people were aged under 25.

But thanks to efforts of younger people, we can breathe a fairly green sigh of relief as the end of the world clearly won’t be nigh any time soon. The research suggests that saving the environment rests with the young, as these are the most environment-friendly group. In fact, a significant 39 per cent of them said they would cut down on holidays abroad to save the environment. Youngsters are also more likely to select a holiday company based on its green credentials.

The research went on to highlight the decline of the traditional travel agent. More and more people are swapping a trek down the high street for a feet up, cup of coffee in hand, browse around the internet. An overwhelming 70 per cent of people said the internet was very important in planning their holiday.

The average cost of a holiday, per person and excluding holiday spending money, these days is £1,171. That’s a fair amount of money, but ask yourself if you’d be prepared to pay just a little bit more for the peace of mind that you’re saving the planet for future generations.

Chris Armond, business director at BLM, which commissioned the research says&nbsp;“The green message is not getting through to holidaymakers, who appear to value their vacations more than the environment. The internet is helping travellers become more independent, so much so that traditional travel agents have to change their business model to attract holidaymakers back through their doors.”

Picture: Footprints in the sand: but what about your carbon footprint?